The Red Cross — The Sri Lankan chapter of this worldwide organization is sending updates about Sri Lanka and providing food, blankets, clothes and first aid on the ground.

Oxfam — Oxfam has teams on the ground distributing portable toilets and other hygiene items to families displaced by the landslides.

PickMe — If you’re interested in sending goods but are not near Sri Lanka, this app is a good option. Pick “Food Aid” on the PickMe app and choose to make the donation now or later.

Without Borders Sri Lanka — If you’re in Sri Lanka and have the ability to donate food or dry goods, this group is collecting items to take to people displaced by the floods. Details about drop-off locations are on its Facebook page.

SocialService.lk — This organization has partnered up with the app bigbon to collect donations for those in Sri Lanka who have been affected by the floods.

Sarvodaya — A relief organization in Sri Lanka, Sarvodaya has teamed up with media organizations like Siyatha TV, Siyatha FM, Varnam TV, Varnam FM, Kiss FM and Real Radio to support those affected by the flooding.

Colombo: Heavy rains lashed the central hills where a massive landslide buried three villages Thursday morning and the rescue operations in flood and landslide affected area have been hampered due to incessant rain, the officials said.

A massive landslide triggered by torrential rains buried hundreds of homes in three villages in Aranayake area of Kegalle district in the central hills, and more than 200 families were missing Wednesday and feared buried under the mud.

Sri Lanka Army troops, Red Cross teams and civilians digging the mud had recovered 20 bodies so far but hundreds are feared buried in the mass of mud. The rescue teams are still digging through the rubble from the mudslide to find survivors despite the risk of further landslides in the area.

Meanwhile, the rapidly rising water level of the Kelani River is threatening more floods in low lying areas and residents in the surrounding and riverbank areas were evacuated yesterday, and rescue operation with the assistance of the tri forces are currently being conducted to help those in need of assistance in those areas. 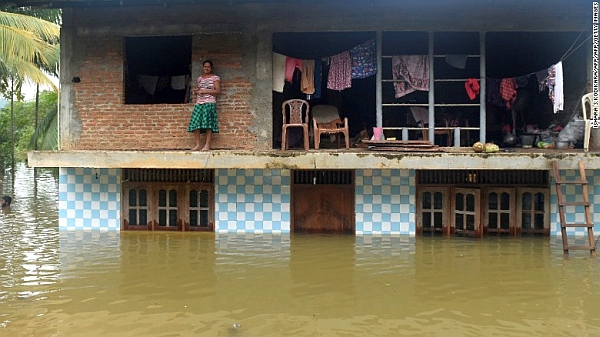 May 18 2016, Colombo: Heavy Flooding and landslides have were fueled by the torrential rains over the past three days killed 37 in Sri Lanka while hundreds are missing and feared dead from a landslide in the central hills.

Massive landslides triggered by torrential rains buried hundreds of homes in three villages in the central hills of Sri Lanka, and more than 200 families were missing on Wednesday, the Sri Lankan Red Cross said.

Around 200,000 people are currently being housed in hundreds of welfare centers across the country.

The northern town of Kilinochchi was struck by 372 millimeters (nearly 15 inches) of rain in just 24 hours -- a quarter of the area's typical annual rainfall.
The downpour caused flash flooding and destructive landslides across the country. Thirteen bodies were recovered by rescue teams in Aranayake, Kegalle District, after a massive landslide hit a number of villages in the area.

According to the Red Cross, 200 families were initially buried by the debris but rescue teams had managed to reach over 180 people.
A second landslide in Bulathkohupitiya killed three, a military spokesperson said, but he added that local villagers said up to 100 people could still be caught in the mud.

Workers in areas prone to landslides in the tea producing district of Nuwara Eliya were evacuated to safe zones.
The rains have come ahead of the regular monsoonal downpour expected later next month and are the result of a depression in the Bay of Bengal, according to the Meteorological Department.

Following Information is about floods in 2012 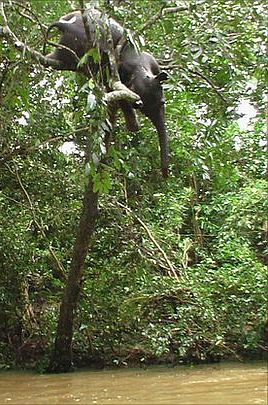 Colombo, Sri Lanka -- Heavy flood due to rains in Sri Lanka's North Central and Eastern provinces have displaced almost a million people and caused widespread devastation, according to government officials.

The travel plans for Anuradhpura Kandy and other areas hit by flood have been disturbed. Tourists interested in visiting the areas must wait till the water settles down. Aid workers and journalists are welcome to take our services please contact us for local guides or transport in Sri Lanka

An image has emerged from Sri Lanka of a dead elephant calf stuck high in a tree after getting caught up in the country's fast-flowing floods.

The animal was found near the Galoya river, which rose 18ft (5.5m) above its normal height. Local villagers alerted photographer Kanchana Kumara Ariyadasa, who took the picture on Thursday.

He believes the photo will be a defining image of the country's recent heavy flooding.

"I have been working as a journalist for the last 10 years but this is likely to be one of the strangest photos I will ever take in my career," Mr Ariyadasa told the BBC.

More on Floods in Sri Lanka

The officials say more than 325,000 people had been displaced by flooding. At least 27 people have died and more than a million are affected.

The displaced have been housed in 505 welfare centers and relief efforts are under way, said Pradeen Kodippili, assistant director of the Colombo-based Disaster Management Center.

The worst hit areas were the districts of Anuradhapura and Polonnaruwa in the North Central province, said Maj. Gen. Boniface Perera, a Sri Lankan army commander.

The eastern districts of Trincomalee, Batticaloa and Ampara are also affected.

Prisons flooded in Anuradhapura, and inmates had to be moved to three different prisons.

In the Polonnaruwa district, the town of Medirigirya was fully submerged in water Saturday. Perera said army search-and-rescue teams -assisted by naval craft -- were deployed for evacuation work.

The intensity of the raging flood waters was illustrated by an incident Thursday night.

Perera said his headquarters received a distress call that a group of villagers were marooned on a patch of land and that rising waters would swallow them within hours. Two boats were sent for their rescue at midnight Thursday. When one boat with the 17 villagers came within 50 meters (55 yards) away from their berthing point, gushing waters lifted the boat and smashed it on a culvert.

The boat broke into three pieces, leaving at least five people -- a navy sailor, a 6-year-old child, an 8-year-old child, a man and woman -- dead. Others who were swept away clung to trees and were rescued by the second boat. Troops used flashlights in the heavy downpour to locate them, Perera said.

The floods have left some stretches of railway line under nearly a metre of water.  Officials in Ampara to the south of Batticaloa say the rainfall there since Saturday has been the highest ever recorded in such a short time.

"There is a shortage of food for children," a member of Sri Lanka's minority Muslim community in Ampara told BBC Tamil on Wednesday.

"We were forced to divide a single breakfast food parcel into four and give it to our four children.

"We have not got any help from the government. But the local people - especially the rich - have come forward and helped us. We are only getting something to eat because of their generosity."

A number of big reservoirs have burst their banks, destroying paddy fields in a major rice-growing area.

Over a million people have seen their homes flooded The air force has been helping evacuate people and drop food supplies to some cut-off communities.

For more hotels or booking requests please contact us

Our other Web sites

All rights for the content of this site are held with Travel & Culture Services Sri Lanka. Please contact us for permission to reproduce

it any amendments. alterations. On 1 be advised Welcome Meeting 2 Galle make afternoon